Posted on September 1, 2022 by Terri
Posted in Denver | Leave a comment

Cara Cruikshank = “Courageous Vulnerability: How Can Men Support Women to Speak Up and Be Seen?” 100TPC-Denver, Colorado 2018

“Courageous Vulnerability: How Can Men Support Women to Speak Up and Be Seen?” A Conference Panel and Multi-Sensory Literary Salon A Non-Profit Fundraiser in Honor of #metoo, #hertoo, #timesup presented by Cafe de la Culture, Moving to End Sexual Assault, … END_OF_DOCUMENT_TOKEN_TO_BE_REPLACED

Shoreline: an Evening of Multi-Media Performance Poetry
in Conjunction with 100,000[,000 Dead] Poets for [Spare] Change

September, 2014, Denver – Shoreline: an Evening of Multi-Media Performance Poetry takes place Thursday September 25th, 7:30-9:30pm at Hinterland Art Space, 3254 Walnut Street in Denver. This eclectic event is one of a week-long series of poetry happenings under the umbrella of 100,000[,000 Dead] Poets for [Spare] Change sponsored by Howling Dog Press and by invitation of the international movement: 100,000 Poets for Change. Michael Annis, the Denver Metro area 100TPC Producer, is founder of Howling Dog Press. This event is free and open to the public.

An ongoing audience-interactive piece will allow for creative interplay when the crowd is invited to create “Haiku Shore” (via grease marker board) and also to draw word constructs on the live skin of “Graffiti Man” and then to pair the two word shores into immediate, crowd-evolved poetic pieces.

This is a free event, honoring the cause of “100,000 Poets for Change” (100tpc.org), founded by Michael Rothenberg, poet and editor of Big Bridge Press and Zine, in the San Francisco Bay area. Rothenberg’s movement, which has grown to include events in over 100 countries worldwide, began in 2011 and has been supported ever since as a viable cause regarding the power of human expression.

Hinterland Art Space is the creation of Sabin Aell and Randy Rushton. The term Hinterland originates in the German language and means: beyond what is visible or known. Hinterland features adventurous contemporary art with extravagant and coherent visions. Entirely built with reclaimed and salvaged materials, the space appreciates all artists and guests that are in resonance with the desire to co-create “within living, as energy-efficient as it gets.” Hinterland Art Space was winner of Westword’s 2012 Master Minds Award.

Mike Romoth has always been a strong believer that travel is the most important thing any artist can do. He has lived in Denver, Nepal, London, New York, and Seattle, and traveled many other places along the way. He believes in the artist as activist and feels that artists and writers must confront society’s ills and engage in real and meaningful action to make the world a better and more enlightened place. As a lifelong environmentalist, nearly everything Mike does is intended to remind the humans that they must pursue balance with nature and not seek to conquer it. HE-WHO-IS-MIKE HAS SPOKEN!!!

The Village Voice (NYC) ran Mike’s article “The Climes They Are A’Changin.” as the cover of the Aug 6, ’02 issue. He was also included in the 1993 PBS documentary The United States of Poetry, which was published as a hardcover book to accompany the documentary.

Valerie Szarek is a familiar voice at open mics in the Boulder/Denver area.
She has been a student of poetry at the Jack Kerouac school of Disembodied Poetics Summer Writing program at Naropa since 2005.

Val has traveled with writers to Prague and Egypt. She is currently performing her first multi-media piece on the Arab Spring revolution, and her Shamanic studies in Egypt. Her writing is spiritual, political, and transformational. She owns and operates Breezy
Mountain Leather in Boulder, Colorado, and maintains a healing practice.
“May I walk in beauty. Again.” is her favorite prayer.
Books: 13 Moons on Turtles Back; Gratuitous Beauty; 14 Days and Nights in Prague; Signs of Life.

Eddie Eifler has been a member of the Denver Slam Community since 2004. He is a full time English teacher and mentor. Eddie has been a competing member of 2 Denver Mercury teams, as well as coaching a number of Mercury and Minor Disturbance slam teams. Eddie was chosen by a jury of his peers to showcase on finals stage at NPS 2014.

Piper Mullins has been around Denver slam for years, but has just begun competing in the last two years. She was a member of the 2013 Denver Mercury Slam team, coach/alternate of the 2014 team and is the current slam master for the Denver Mercury Slam. She has been published in La Palabra, as well as the Swimming With Elephants Publications Anthology: Light as a Feather.

Roseanna Frechette is a longtime member of Denver’s thriving poetry community. Former publisher of Rosebud Forum magazine, she has great passion for the power of small press and the beauty of spoken word. Showcased in a variety of regional venues including Sparrows Poetry Festival, Boulder Fringe Festival, and ARISE Music Festival, as well as public television and radio, Roseanna is a guest host for Mercury Café’s Jam Before the Slam and a respected participant in the open mic scenes of Denver & Boulder. Her poems have appeared in a variety of small press publications, most recently Lummox (published in L.A.) and Naropa’s Semicolon.. Interpretive dancer and yogi as well as poet, Roseanna’s integrative style reflects both a respectful love of nature and a bohemian appreciation for urban culture. Her performances are spirited and vibrant as she explores poetic landscape through a range of dynamics.

Mila Popovich is an interdisciplinary scholar, performing artist in multiple dance forms, and a published bilingual poet. She has over 25 years of international dance training and performing experience in a variety of dance forms, ranging from folk dances from the former Yugoslavia and the Balkan Region, to Middle Eastern, Flamenco, Afro-Brazilian, Samba, Salsa, and African Dances. Coming from Montenegro, an ancient part of the world where the East and the West meet, she draws on that cultural heritage for her artistic expression. Lately, Mila has been performing as an experimental dancer and a spoken word poet collaborating with Denver’s leading artists creating to innovative antique and ethno music styles as well as improvisational electronica.

Scoz, in his own words: “is a dude like any other who occasionally does some art. He has won some awards but who really gives a shit?”

We thank our audience for choosing to join us in this celebration of the constant fact that life IS change. You are invited to perform as well when we combine Haiku Shore (grease marker board) with Graffiti Man, both upon which you are encouraged to compose poetic lines. At the evening’s end we will welcome audience to create poems in the now by drawing lines from each of these shores into one shoreline.
{Video art for the Shoreline signature piece compliments of MD Friedman. Event flier art by Scott Seeber. Much gratitude goes to Hinterland Art Space.} 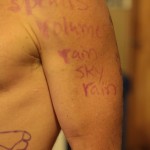 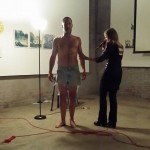 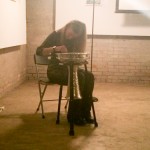 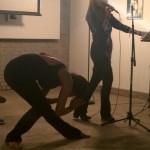 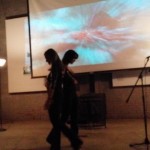 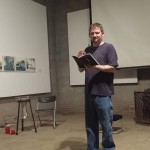 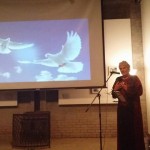 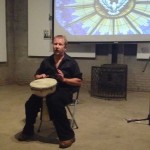 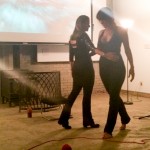 100,000[,000 Dead] Poets for [Spare] Change, the Denver event, will feature poet/performers Tom “Wordwulf” Sterner, Roseanna Frechette, Ken Greenley, Mike Romoth, Sonia “Mother Jones” Skakich-Scrima in her one-woman performance, myself– Michael Annis, founder of HDP, and the spirit of Gregory Greyhawk. Additionally and very importantly, from the World Peace Academy in Switzerland, Adam Roufberg will present an address on tools to promote conflict resolution, as it is vital to be able to offer solutions resolving problems originating from political and social conditions of war and other conflicts. Howling Dog Press is the acting host, and the great roaring metal band Illicit Sects [it sounded like a helicopter landed in the room] will provide the searing, lightning energy within which poets will soar. As a special feature, a film by Swoon Bildos of “Kiss the Cobra” by Michael Annis, as performed by Sitara Monica Perez in a soundscape by Italian composer, Sonologyst, will have its world premier. Covering the event, FreeSpeechTV will be videotaping and participating in it, with a speaker from FSTV on media independence. All LIVE at the classic Oriental Theater, 44th & Tennyson, Denver. Doors open at 9 am. No admission charge. There will also be an exhibition of 100,000 Poets for Change posters from across the globe at the venue–this being only one of two exhibitions in the world, the other in Santa Rosa, CA.